Al Hirschfeld was perhaps the most famous caricaturist in American life, known especially for his light, comical black-and-white portraits of Broadway theatre stars prior to his death in 2003. But during the 1930’s and 40’s, he got his start working on movie posters and did quite a number of them featuring The Marx Bros. His career was so illustrious in fact that in 1996, they even made an Oscar-nominated documentary about him called The Line King! 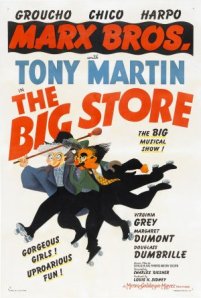