The new Wes Anderson comes out in selected theatres on Friday — and whether you love or hate his brand of esoteric films — you cannot deny the auteur’s unique sense of style and attention to detail that permeates every frame of his work.

From now until November 22, the Spoke Art Gallery in San Francisco is presenting an art show-based-on-a-film(s) called Bad Dads: A Tribute to the Films of Wes Anderson, featuring one of my personal faves, The Royal Tenenbaums… 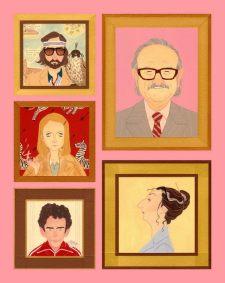 Though they don’t really feature movie posters, Apartment Therapy has a nice little feature on the best movie interiors and production designers in the film biz, starting with one of my favorites, The Royal Tenenbaums…

I’m usually not a big fan of re-imagined, hipster movie posters — but while looking up artwork on Wes Anderson, I discovered the minimalist marvels of Toronto-based designer, Ibraheem Youssef, who has garnered quite a following on SlashFilm and the like…and deservedly so!

I recently had a delightful day attending the Maira Kalman exhibit at The CJM to launch her new book, Various Illuminations of A Crazy World. 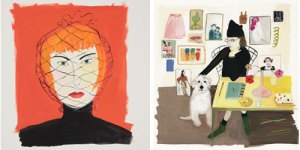 Kalman, whose colorful illustrations have brightened both The New York Times (via her amazing And The Pursuit of Happiness blog) and The New Yorker covers for years, has never done a movie poster before (I don’t think!). However, she has collaborated with Animal House pal, Rick Meyerowitz, on several projects, including the famed Newyorkistan cover below (left), which cleverly spoofed Saul Steinberg’s legendary 1976 “View of the World” (right).

Not that she needs the work — but here’s hoping that Wes Anderson or some quirky indie film snaps her up soon to do their next print campaign!

The Criterion Collection DVD artwork for Wes Anderson’s films reminds me a lot of Maira Kalman, except they were done by Ian Dingman (Bottle Rocket) and Wes’s talented bro, Eric Chase Anderson (Rushmore, The Royal Tenenbaums, The Life Aquatic).

Here’s my dream casting for The Ramones biopic if it ever gets made: Jason Schwartzman, James Franco, Emile Hirsch, and maybe Jay Baruchel as Joey Ramone…directed by Wes Anderson, of course.

Do you support the Megan Fox ban? The Royal Tenenbaum votes no!